Workshop from our Low Intermediate students!

As a class, the EC Bristol students in Low Intermediate 2: Kelsio, Amira, Lucia, Ignacio and Nilton created their ideal friend from their own ideas and combined these elements in one person.

Then they thought about how it would be 10 years later. In groups they then created tragic biographies about this person’s life. 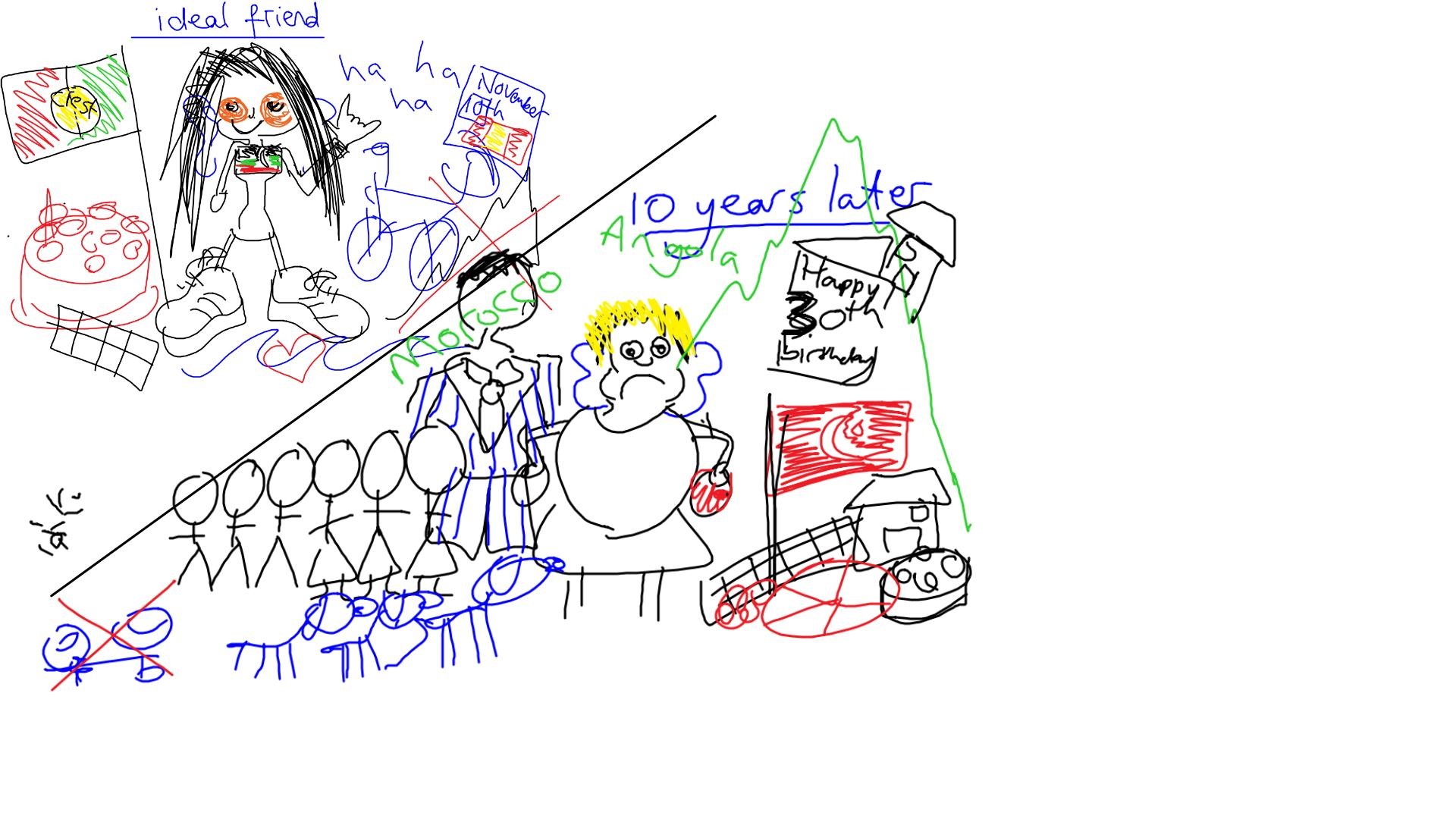 I used to have the perfect friend. I met her in high school, we became friends because she was funny and she was a good listener.

We enjoyed eating chocolate together and went running at the weekend. We travelled to Spain and Portugal on holiday. She used to listen to rock and roll. She lived in Libya and she liked going to the seaside. She had a bike but she didn’t like going to mountains with it.

She finished her studies at Libya University. After she wanted to travel around Europe. The first stop was in Italy. She met a Turkish man in Italy and she fell in love with him and she got pregnant. When her parents knew what had happened they didn’t believe it.

Then she decided to go with him to Turkey and four months later they got married. They had a beautiful honeymoon because they travelled to the Dominican Republic. Then the three babies were born in Turkey. They were very happy. One year later her husband found a great job.

They decided to go on holiday to Morocco and Angola. In Angola they met a boy whose name was Kelsio.

Kelsio was an important businessman who had a lot of companies in Africa and her husband became a business partner and they decided to open a branch in Turkey. At the same moment they received the news that she was pregnant again. She didn’t want to have more children because it was impossible to educate all of them. She had three more babies. Her husband was always in Angola. She decided to live on a mountain to have more space for all the children. She bought 3 dogs to take care of her family. She was depressed because she never saw her husband and began to eat a lot of pizza and chocolate and she became a fat woman.

Now my friend is an unhappy person because she thinks that she has spent her life taking care of her family and she has lost touch with everybody. Now we just know that she is living in a small village on a mountain in Turkey.

I used to have the perfect friend.

I met her when I was a student, and I was studying in Libya. She was happy and a kind person. She came from Libya and she used to love sport and had travelled around the world.   She liked visiting Portugal and Spain.

She used to hate mountains and loved the sea. She had long black hair and beautiful brown eyes and she used to love rock and roll. She usually ate a lot of cakes.

She got pregnant by a boy she met at university who was from Turkey. Her parents didn’t accept the relationship and they went to Turkey without their permission and when they arrived in Turkey they had a discussion so they got divorced. She was depressed. She ate a lot and so she became fat.

Five months later she met a new man at a party and they got married immediately. During the honeymoon in Morocco her sister called her to tell her that her parents died in a car accident in Angola when they were on holiday. She went to the funeral but she was so upset and decided to return to Turkey and she got pregnant again.

When she went to Morocco with her new husband, she had five children at the same time. She felt sad and depressed. She was all the time caring for the babies and she had not enough time to do exercise. She had a busy life. She became too fat but her husband loved her so much.

She used to eat chocolate and cakes to remember her old friend. She lived on a mountain and the bought three dogs for her children.

Her husband decided to live in Turkey and she met her ex-husband there. She was not happy with her new husband. She was depressed again because she thought a lot about her first husband and her previous life.

Now my friend lives so far away and I don’t see her. We are not friends anymore. I know that she is unhappy now with the second husband, six children and three dogs.

PrevPreviousWatch our EC Bristol students Ice Skating!
NextActivity of the day: Graffiti walk and a hot drink in Southville!Next

Learning English – Your Role as a Student