A simple tip for improving your academic writing 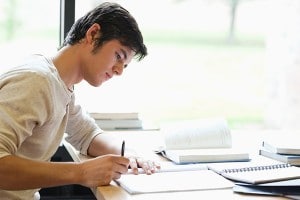 Sometimes, when writing essays, particularly for tests, contemporary students will overlook one of the most basic principles of good academic writing: paragraphs. Too frequently do I, as a 10-year teacher, see single sentences sitting by their lonesome in the midst of other swaths of Facebook style posts. Understandably, the advancement of social networks, mobile phones, and texting apps has forwarded a culture in which a single thought is inscribed and then sent to its recipient. After, another single thought is typed, and the “send” button hit again. A third thought occurs, and is singularly shot into space, bouncing off satellites and phone towers, landing one by one in a friend’s phone.

So, here’s a very basic rule to remember for all those students out there trying to achieve a higher score on their tests: a paragraph is, at minimum, 3 sentences. Generally, a good essay paragraph will include a topic sentence, featuring the primary reason or argument, followed by elaboration on concepts and definitions, and finished with a supporting example. These three sentences form the core of any solid academic paragraph, and are worlds beyond the WhatsApp style writing too frequently used in modern ESL essays.

On a final note, it may help to realize there is reasoning behind the 3 sentence minimum rule. I once had the reasoning explained to me very well by a UC San Diego professor. In short, your ideas are like a box. When you present your box to someone, you must unpack the box to show that person everything inside. When you present your ideas to a reader on paper, you must unpack all the different parts of your idea, leaving nothing unexplained, undefined, or unrefined. The process of unpacking the idea box naturally results in paragraphs that are longer than one sentence. If your paragraphs are one sentence, then your idea box is still wrapped up, and you’re not showing the reader everything there is to see. Your box remains closed, and your ideas unexplained. Thus, unpack the box, and show the world what you really mean.

Why learning English or any new language is important

Great ideas for practising a language